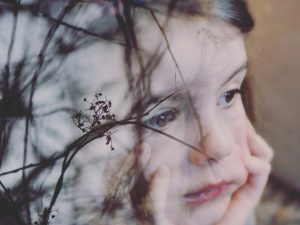 If someone asked you about your childhood, what would you say?

“I don’t want to talk about it,” or “There’s not much to say,” or “Nothing was wrong with my childhood”?

Perhaps you wouldn’t remember much even if you tried… except your mother’s icy face, your dad’s angry voice, or your uncle’s drunken laughter…

And your fear of being in this unsafe and dangerous world.

Scared and sad, you had no one to talk to. No one who would listen and understand.

So you froze inside and became a terrified, lonely child, desperate to be accepted and loved.

No wonder you would rather keep your childhood memories buried or disengaged than face them and feel all their pain.

Let me tell you my story.

Both my parents were young and ambitious. They studied to become engineers, but at the age of 21, they made a mistake. They became parents.

I was their mistake, and my mom made it clear to me.

Back then, if you didn’t have a granny to look after you, you spent your childhood in institutions. It was “for your own good,” of course.

So off you went – first to nursery school, then kindergarten.

That may be normal for many children, but my experience was a radical version of child care. Imagine five days a week without parents. Then three months in the summer between school years with no Internet, cell phones, or even a normal phone.

I lived with strangers fighting their own demons. Mostly women who didn’t love other people’s kids.

I was a little girl looking at other people’s windows, dreaming of being with my family. Crying myself to sleep. Wishing my parents would come and take me home with them.

I hadn’t learned yet that my home wasn’t a safe haven.

It was a home ruled by a mentally unstable, self-centered, and abusive mother. The person who was supposed to love and protect me was the most damaging one.

Her anger was like a hurricane sucking up everything in its path. I was never the same after it passed.

Coming home was like going from the frying pan into the fire. I veered back and forth between the stress of being abandoned and the stress of emotional abuse.

I was anxious, depressed, and lonely.

If I tried to tell my mother how I felt, she would dismiss me as a nuisance. “Children don’t have those kinds of feelings,”–she would say.

No wonder, I lived with stomach and lower back pain. I was always nervous, anxious, and feeling unsafe.

And all I wanted was to feel loved.

Separating children from their parents for a long time, even with the best intentions—like saving their lives—is a recipe for trauma. 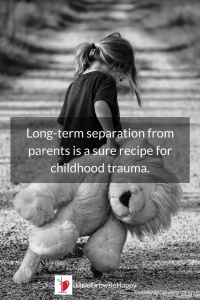 The Brits learned this after sending their kids to the countryside during WWII. The kids who stayed in London didn’t show symptoms of trauma – despite the bombings they felt safe, protected by their parents. While those who were sent away became traumatized despite fresh air and absence of antiaircraft sirens.

The world has evolved since.

We have also realized that not all mothers are loving, nurturing, and kind. That lots of ugly things happen to children behind closed doors.

The truth has been shocking. 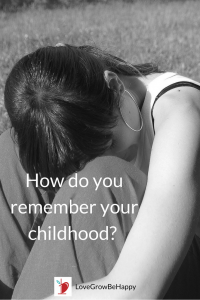 Yes, adverse childhood experiences (ACEs) are very common. Physical, sexual, and emotional abuse, alcohol and substance abuse, or life with a mentally ill parent (or parents) are among them.

Hermann, van der Kolk and colleagues have also shown that 87 % of adults diagnosed with borderline personality disorder or BPD has been severely abused and/or neglected starting at the age prior seven.

Millions of children are still getting molested, neglected, and abused. Not in the third world, but in our own “civilized” homes.

Trauma changes a child’s brain. To secure a child’s survival, the brain builds connections that are different from the circuits of children who grow up in a safe environment. A traumatized child gets stuck in a distress mode, over-sensitized and easily re-traumatized.

The child’s body becomes like a wind-up spring, always tense and aching.

When anxiety, shame, guilt, hopelessness, or fears become overwhelming, the fuse goes off, throwing a child into numbness. Dissociation becomes a savior in the guise of a tormentor.

In spite of the evidence of research, not everyone is convinced.

Developmental trauma isn’t yet a recognized diagnosis, although many practitioners around the world use it in their work with clients.

Want to See the Light?

Trying to forget the abuse will keep you trapped in the past.

Feelings don’t vanish. Hidden behind the curtains of numbness, they still control you, invisible, but very much alive.

Do you want to merely exist, going through the motions of your life in a zombie-like fog?

There is another way–take the dusty curtains down and look at your past with open eyes.

To heal the wound, you must first expose it and to clean it out.

To open an abscess requires courage. You are stronger than you think. And you are brave too.

But don’t take this journey on your own. Find a professional who specializes in childhood trauma.

The following is an overview of the proposal made by Bessel van der Kolk, MD, and his team.

A. Exposure
The child or adolescent has experienced or witnessed multiple or prolonged adverse events over a period of at least one year beginning in childhood or early adolescence.

B. Affective and Physiological Dysregulation
The child exhibits impaired normative developmental competencies related to arousal regulation, including at least two of the following:

C. Dysregulation of Attention and Behavior
The child exhibits impaired normative developmental competencies related to sustained attention, learning or coping with stress, including at least three of the following:

D. Self and Relational Dysregulation
The child exhibits impaired normative developmental competencies in their sense of personal identity and involvement in relationships, including at least three of the following:

E. Posttraumatic Spectrum Symptoms
The child exhibits at least one symptom in at least two of the three PTSD symptom clusters (B, C, & D).

F. Functional Impairment
The disturbance causes clinically significant distress or impairment in at least two of the following areas of functioning:

Scholastic
Under-performance, non-attendance, disciplinary problems, drop-out, failure to complete degree/credential(s), conflict with school personnel, learning disabilities or intellectual impairment that cannot be accounted for by neurological or other factors.

Familial
Conflict, avoidance/passivity, running away, detachment and surrogate replacements, attempts to physically or emotionally hurt family members, non-fulfillment of responsibilities within the family.

Legal
Arrests/recidivism, detention, convictions, incarceration, violation of probation or other court orders, increasingly severe offenses, crimes against other persons, disregard or contempt for the law or for conventional moral standards.

Health
Physical illness or problems that cannot be fully accounted for, physical injury or degeneration, involving the digestive, neurological (including conversion symptoms and analgesia), sexual, immune, cardiopulmonary, proprioceptive, or sensory systems, or severe headaches (including a migraine) or chronic pain and fatigue.

Vocational (for youth involved in, seeking or referred for employment, volunteer work or job training)
Disinterest in work/vocation, inability to get or keep jobs, persistent conflict with co-workers or supervisors, under-employment in relation to abilities, failure to achieve expectable advancements.

This article was inspired by the work of Bessel van der Kolk, MD

Note of caution: Don’t use these criteria for self-diagnosis but to educate yourself. If you have a suspicion that either you or someone you love is having the disorder, take a qualified talk with your physician.

Images by Pixabay and Unsplash