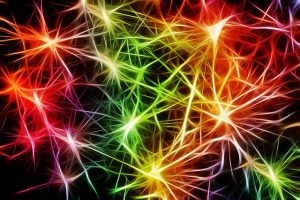 Then you have seen animals playing dead in order to stay alive.

They drop down and freeze until the danger is over. Not the usual fight or flight reaction, wouldn’t you say?

I’ve seen it in a real life, and here’s the story.

I was walking our powerful German Chafer, Gin, on the outskirts of the village. And—just as it did every day—a little terrier from a house nearby ran at us, barking its lungs out.

My phlegmatic dog would usually ignore this minor nuisance of a cousin. But today he suddenly growled and showed his teeth. His huge head came in dangerous proximity to the noisy protester.

I gasped, taken aback by his angry reaction, and shortened the leash.

Meanwhile, the little guy dropped to the ground and froze.

Shortly after his angry outburst Gin became his usual calm self, sniffing around the field as nothing has happened. 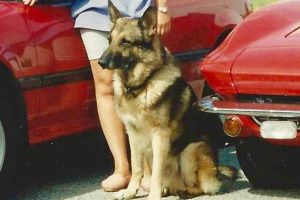 What would’ve happened if the terrier had put up a fight? I still wonder.

Do you think this only happens in the animal world?

Always Have a Back-Up System

Humans, too have this ancient defense mechanism engraved into our brains. We, too, can respond to a threat with sudden numbness, dissociation, and immobilization. The vagus nerve plays a huge role in this response.

It has happened to millions of people who experienced or witnessed an assault, natural catastrophe, or other threat to their existence or integrity.

But unlike animals, humans feel ashamed of such a reaction, because they were paralyzed, unable to act. They ask themselves questions like, “Why didn’t I fight back?” Or “I should’ve helped her, but I froze like a coward.”

Stephen Porges, MD, a world-renowned researcher, has found an explanation for this phenomenon.

He is the best person to present his theory, and I encourage you to listen to the video below published by the Bulletproof channel on YouTube.

In this video you will learn:

Notes from a NICABM webinar to help you memorize a few points of the theory:

“The vagus is a cranial nerve that exits from the brainstem and goes to many organs in our body. About eighty percent of its fibers are sensory.”

“It is the portal to the brain from the periphery, and it tells our brain the state of our body.”

“It’s sort of a cable that connects our body with our brain. The vagus has a whole series of fibers. Some of them are myelinated, which means they’re very efficient in communicating. Some are unmyelinated, and they regulate organs that are both above our diaphragm and below our diaphragm.”

“The vagus is this very critical nerve that deals with all or most of our primary internal organs and it communicates to our brain their status” [(including heart and gut-IB].

“When you feel good, your vagus is telling your brain that it is in a good state; when you are not feeling good or you are feeling nauseous, it is conveying that information as well.”

“Trauma is normally associated with unsuccessful attempts to get away. When we can’t get away, we can’t use fight/flight; we resort to our most primitive neural circuit, and that, functionally, is a shutdown circuit.” 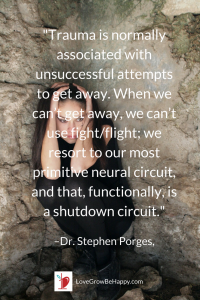 “When you deal with trauma victims, their nervous system is a neuroceptive state that has great advantages in detecting a predator, but is totally compromised in being social.”

“Polyvagal theory proposes that when an individual is in severe life threat and unable to utilize mobilization strategies or social engagement, the neuroceptive features of that challenge may put a person in shutdown.”