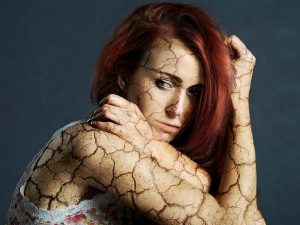 Exhausted, you fall in bed.

You stretch your aching body under the sheets and close your eyes. Waiting for relief…

But your mind won’t hush.

Thoughts, replays of conversations—real and imagined—start running through your head like a circus carousel.

A never-ending dialog with yourself. And your mom.

“I should’ve said something.” “If I’d just told her how she makes me feel, she would have stopped being such a bitch.” “I should’ve helped her more.”

Your heart is in a grip of shame. The poison of self-loathing makes you cold inside.

You sigh resignedly and slide out of bed.

You make yourself a cup of tea and open another book by Kathy Reich. Crime novels are a good way to distract yourself from burning pain.

What is Complex Trauma?

C-PTSD is about exposure to a repeated or prolonged stress. It’s usually interpersonal; for example, it often happens inside a relationship, again and again. But a person is trapped in her circumstances, unable to escape.
A single incident in complex trauma may be less severe than a traumatic event causing PTSD, but the effect accumulates over time, resulting in profound damage to a person.

Both in children and adults, greater trauma exposure is associated with more complex symptom presentation. The symptom pattern observed in the child sample is consistent with the concept of a Developmental Trauma Disorder, whereas the corresponding symptom pattern observed in adult subjects is consistent with the concept of Complex PTSD.

Examples of traumatic situations in adults that can result in C-PTSD include ongoing family/domestic violence; prisoner of war and refugee camps; torture; brothels/human trafficking; and more.

Just think of people living with the horror of being imprisoned and tortured, or witnessing other people die, day after day. Lost homes, food as a luxury and safety is a dream. Traumatized soldiers and their bereft next of kin.

But complex trauma can also originate in childhood or adolescence. In this case, it usually develops within a relationship to a caregiver who is the source of the child’s chronic but inescapable distress.

A child’s mistreatment can be excruciating for her emotional, mental, social, and physical development and health. It affects her for the rest of her life.

An adult person with attachment/developmental trauma in her past may function well for a long time if she lives in a safe, supportive environment. But any relational stress, like a conflict at work or in a family, may trigger old coping mechanisms and result in re-traumatization.

Look for the Weak Point

In the middle of the ‘90s, I worked with refugees and asylum-seekers from all over the world, first at the Danish Red Cross Center, and later at a city council.

Hundreds of stories, some dark enough to deprive you of sleep for weeks.

I came from a world of white coats and scientific research. Unprepared as I was, I found myself in a world of trauma. It was an eye-opener.

One of the first things I learned from my mentor was to always look at a client’s history.

Childhood traumas (DTD) most often occur at the hands of attachment figures and traumas associated with Complex PTSD often emerge from a history of sustained relational or interpersonal traumas beginning with early life attachments.

People who experienced trauma in their early childhood years are more susceptible to re-traumatization.

Exposure to repeated or prolonged traumatic events may have a tremendous impact both on your psyche and body.

As the result of an ongoing or prolonged stress, complex trauma keeps the body in a state of a chronic stress response.

Imagine a child living with a mentally ill, abusive or negligent mother, with no one to turn for protection and support. Or a woman in an occupied territory living in constant fear for her life and integrity, and for the lives of her children. Or a soldier in a jungle prisoner camp, tortured day after day for months or years.

The amygdala, the smoke alarm of the brain, is constantly activated, sending danger signals to the body. It reacts by sending stress hormones into the bloodstream, keeping the body in a chronic fight-flight state—your muscles are tense, your breathing is short and shallow, and you can’t concentrate on your tasks. 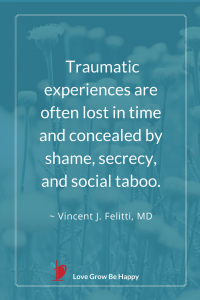 Somatic symptoms often seen in C-PTSD include shallow breathing and dry mouth, feelings of chronic fatigue or exhaustion, hypervigilance and anxiety, and an inability to stay still or feeling frozen, barely able to move. There may be dizziness, fainting, or pain, too.

Many of these physical symptoms can be indicative of physical illnesses like adrenal fatigue, various problems with digestion, migraines, low-back pain, fibromyalgia, eating disorders and a few others.

But even if one physician after another says there is nothing wrong with you, don’t give up. Especially if you are aware of abuse in your past.

When you’re stuck in trauma, simple or complex, you may feel like you are not real and the world around you is a mirage.

You don’t belong, you’re different, and you’re not like the “normal” people.

It’s like somebody cut you out of life – you can watch it pass by, but you can’t be part of it. And you can’t feel.

Although this state is invisible and not dangerous, the excruciatingly painful feeling of numbness and not belonging is a frequent companion of post-traumatic stress.

Difficulties with Regulating Emotions and Impulses (Affect Dysregulation)
It shows in reactive anger, uncontrollable temper outbursts, chronic sadness and/or suicidal thoughts. Feelings of helplessness and hopelessness. Or numbing of the feelings.

Changes in Attention and Consciousness
It shows in either reliving or forgetting of the traumatic events; difficulties with learning due to concentration, attention and memory problems. Inability to be at the moment. Spacing out and episodes or chronic dissociation symptoms like depersonalization and derealization.

Changes in the Perception of Self
Negative self-concept that includes feelings of being easily hurt, worthless, ashamed and guilty. Negative feelings about themselves also include the belief of being unlikable and unlovable, worthless, lazy, dirty, stupid etc.

Changes in Relationships with Others
Lack of trust and difficulty to see whether other person’s intentions are good or bad makes it difficult to have friends and close relationships. Others may feel desperate and needy so they search for a rescuer or someone who can take care of them, ignoring signs that another person may be untrustworthy. And some alternate between being afraid of relationships and being rejected or criticizes–a perfect setup for internal and interpersonal conflicts.

Distorted Perception of the Perpetrator
Obsession with the person who hurt you. Ascribing excessive powers to her, feeling hatred and fantasizing about revenge. Having ongoing internal dialogs with her.

Somatic Symptoms
Trauma affects the body as much as it affects the mind. Many people with Complex PTSD suffer from physical symptoms that doctors can’t explain. But headaches and abdominal pain, stomach and problems with digestion, joint and muscle pain are real although they may not answer to a specific physical diagnosis. People often get misdiagnosed or even labeled as hypochondriacs. And keep in mind that “people suffering for complex trauma are much more likely than the average person to suffer from serious medical problems” (Suzette Boon, Kathy Steele and Onno van der Hart, 2011).

Changes in a System of Meaning
Chronically traumatized people often lose hope and live in a state of despair. They don’t longer believe good things may happen and people can be kind to them.

The best way to treat the consequences of an interpersonal trauma is inside a relationship.

There’s no universal recipe for treating C-PTSD, but it is TREATABLE. You don’t have to live like a scared kid for the rest of your life. 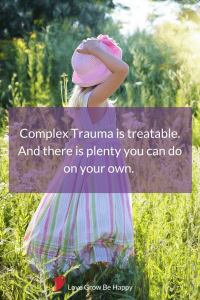 Educate yourself on trauma. Imagine the life you want to live, the person you want to become.

Examine your beliefs. They may not be yours at all, but they are holding you back.

Exercise, dance or sing to help your body get rid of stress hormones.

Find a safe community to share your experiences and feelings with.

There are many things you can do on your own.

But at some point, you might need to find a therapist to assist you on your healing journey.

Get up from your chair.

Lost In the Jungle Of Trauma Terminology? Here’s Your Guide

What You Should Know About PTSD (and Why)

Note of caution: Don’t use these criteria for self-diagnosis but to educate yourself. If you have a suspicion that either you or someone you love is having the disorder, take a qualified talk with your physician.

(and Protect Yourself from Hurt)

Receive 10 short emails to learn how to set boundaries and how to say no so you can improve your relationships.

FREE GUIDE: Get Your Ultimate Guide to Choose Joy Now

FREE GUIDE: Get Your Ultimate Guide to Choose Joy Now